Our television is dead. It’s been ten days now since that fatal day and our house has descended into a an eerie kind of silence, a silence that no children screaming, no adult banter and no music, not even the loud Bollywood songs, can fill in. 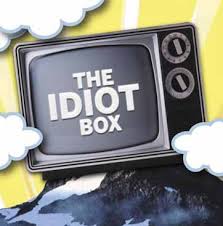 The remote had stopped working weeks ago, probably with a record number of falls, and if not that then with the excessive banging to make it work when battery power got low. We discovered buttons on the TV that we previously did not know about and the troublesome part was having to get up from our comfortable position on the couch to adjust the volume every now and then. We kept reminding ourselves that we needed to buy a new remote control. Well that day never came as our television decided to ‘die’ before that! It did give us a final warning though, like a premonition of the bad times to come. When we switched it on, it showed us a dark screen but we could still hear the sound. We paid no heed and cheered when the screen brightened and continued watching my son’s favourite ‘Tom and Jerry.’ The next day however when my son tried to switch it on to watch yet another episode of T&J, he shouted out “Mummy the T.V. is not working! Mummy, Mummy, Mummy……!” and Mummy had to drop the dishes that she was washing in the sink and run out instantly to sort the matter. I tried the switch a couple of times and also checked the connecting cables but there was no sign of life in my otherwise hale and hearty machine. “Sorry love, it’s not working!” I pacified my son, while secretly being pleased. “Let’s play with your blocks or cars, ok?” I suggested seeing his unhappy little face with his nose all wrinkled up. But nothing got his attention away from the TV. He just kept lying down on the couch staring at the black screen as if willing it to work.

That evening after the usual mayhem of dinner and bedtime, I tried to switch on the TV to get my usual doze and then realised that it wasn’t working. I wasn’t too upset as there were some library books that I had always planned on reading, besides this was my golden chance of having a meaningful conversation with my husband who otherwise loves to ‘fire-gaze’ in front of the idiot box. My illusions were quickly dashed when he brought out the ipad. Thank goodness I have my blog to fall back on for support, and soon both of us got busy, tuning in to a comfortable silence.

Now I know that as responsible parents we talk about the bad effects that the television has on our children, how it affects their eyes, their mind and their social well being. But if used sensibly I think the television could be a great source of entertainment and education. When the kids were younger the TV would offer a much needed break in the middle of a chaotic and crazy day! I used that therapy often letting the kids watch a movie every now and then. It can also do wonders to help get a job done quickly! “Finish your dinner and then you can watch TV.” “Finish your homework and then you can watch TV.” It started off with those Nursery rhyme DVDs which are a blessing for any new mum, which were shortly after replaced by Thomas, Winnie the Pooh and Barney, and those were replaced by Disney and Pixar character movies – Cars, Toy Story, Monsters, Ice Age, the list goes on. We also have a ritual of weekend family movie nights where the whole family finalises on a movie and then watches it together (or atleast tries to). I feel that as long as you are in control of what and how much you let the kids watch, then it can be a win-win situation for both!

I read in an article (given below) about how television flicker rates induce alpha brain rays, lulling the brain into a more subconscious state that can be compared to sleep, literally inducing a kind of hypnosis in the viewer, that turns them into zombies. I think that this is absolutely true and exactly what I feel when I watch TV. It is also exactly what I WANT to feel after a hard day’s work. I am not particular about what I watch, but as the TV drones on, slowly and steadily my brain stops thinking, stops processing, my breathing slows down with my heart rate returning to normal and I feel a general sense of calm and peace. Relaxation at the touch of a button!

The next weekend was spent researching and finalising the new TV. We spent more than an hour in the showroom with my husband focussed in the TV section and the boys busy playing games on the ipads there. For my part I was sampling coffees made with the Nespresso machine on display!

The good news is that the new baby in the family was delivered this morning and amidst much pomp and grandeur it was unveiled from its cover and put on a pedestal, where it now reigns supreme along the brand new home theatre system! Curse it or love it, we sure know how to spend on the idiot box….here’s looking forward to relaxation in style!

I really liked an article on the internet titled The Idiot Box – How TV is turning us all into Zombies. It makes a very interesting and thought-provoking read.