It was already 6.00 pm when I managed to tear myself away from the laptop and from the lure of the social media which seems to engulf me on lazy weekends making it difficult to leave. It was dinner time and I hadn’t cooked anything yet for the family! “Want to go out for dinner?” my husband had suggested merely half an hour ago when I emphatically shook my head dreading the prospect of having to dress up and then drag two boys away from their gadgets only to roam around town, ending up eating some oily, unhealthy stuff that I will regret later. No, I decided, we were not going out!
“French toast boys?” I shouted out trying to get them out of their technology hung-state. “OK fine” they answered in unison slightly confused as French toast is usually our weekend breakfast fare. Though not the best bet for dinner, French toast has basic egg, milk and bread which I thought was more wholesome than some greasy noodles we would have had outside. Besides it was easy to cook and good to eat! That settled, I still had to think about what to cook for hubby and me. I surveyed my kitchen, maybe I could make some chapattis (Indian bread). I love these light and healthy flat breads and make them often but then there was the prospect of having to cook something else to go with them. I opened the freezer and spotted a packet of paneer (Indian cottage cheese). That’s when it struck me – parathas (flat stuffed Indian bread) and I hadn’t made them in a long time! However an only vegetarian menu doesn’t go down well with my husband, so I had to think of something with meat. The beef mince lying in the freezer gave me a brilliant idea….kheema parathas! Yes that was the answer, I was going to make kheema (mince meat) parathas and paneer parathas for dinner tonight! Mouth watering, I couldn’t wait to get started!
I started with cooking the kheema and paneer first. It works faster when done at the same time since their base ingredients are the same. Onions, garlic, ginger, green chillies chopped finely and sautéed in a bit of oil. A bit of spring onions and coriander adds to the taste and colour. I wish I also had some fresh mint leaves but it had to do for now. Some dry masalas(spice powders) added – chilly, turmeric, pepper, garam masala (ground mixed whole spices) with a few mustard and cumin seeds and my base was ready! I then added the still frozen meat and paneer into the respective batters. I had to keep mixing them on high fire to get them thawing quickly and at the same time making sure that the base doesn’t burn. It was difficult managing both together when in walked my little boy in his Santa Claus apron and his small plastic stool ready to give me a helping hand. “What are you cooking Mummy?” he started.
Now this is not the first time that my 5-year old has come to ‘help out’ in the kitchen. He does it occasionally and more so when his own tummy starts to rumble with hunger! To give him due credit I think he does like cooking, likes to taste and smell the ingredients, making his likes and dislikes quite known, loves to use the wooden spatula to mix and stir when needed and keeps his steady barrage of inquisitive questions going. “Why are you adding this…..” “Is this powder spicy?” “Why do I like the smell of parsley?” and so on. His company makes cooking so much more lively and interesting and now that he knows the basic rules of dos and don’ts around the kitchen I don’t get too worried with him being close to the cooking fire. Besides this has helped me understand his basic taste for things and makes it easier to feed him something new by involving him.
Now that our paneer and kheema were getting cooked, I shifted my attention to making the parathas. This is my son’s favourite part too as he gets involved with the kneading and the rolling of the dough. I can proudly say that with every attempt he is getting better and better and his chappatis are getting more and more circular each time! This time since we had to make parathas, each rolled out dough had to be filled in with the mince or the paneer, then folded in and rolled out again before putting it on the skillet to get cooked. Halfway through my son decided that he was not eating French toast but eating plain ghee (clarified butter) and cheese parathas, which he could almost make by himself!
With his able assistance I finished cooking our meal sooner than normal and quickly set on the task of washing up the utensils. Five minutes later my son comes back to the kitchen with a big smile and says “Mummy come, I have a surprise for you.” I walked out into the living room and to my great surprise found that my son had not only cleared up the mess on the dinner table, but had also placed the table mats in order just like how I liked them. It was 7.15 pm by then and taking off my apron I called out happily to my family“Dinner is ready!”

For those of you who are interested I have written out the recipe for making these parathas. Have fun!

Base mixture
The good news is that since both the kheema and paneeruse similar ingredients in their base, cooking can be done simultaneously and quite quickly.
Chop 2 medium onions, 3 pods of garlic, some ginger, 3-4 green chillies. Heat a little oil in a pan and add the mixture. Saute till onion turns pink. Next add the dry masalas like chilly, pepper, turmeric powder. Also add garam masala for added flavour. Salt to taste. Add chopped 2 tomatoes, coriander and mint leaves to this batter and continue stirring on medium heat till the mixture is blended together. (Optional: For the paneer you could also add a teaspoon of mustard seeds, cumin seeds and some curry leaves).
Voila! The base mixture is ready!
Masala Kheema
Add the mincemeat to the above base and sautee for some more time till meat turns colour and has been coated evenly in the mixture. Add very little water and then lower the heat. Cover with lid and let it cook for another 10-15 minutes. Kheema when ready should be quite dry and fragrant.
Paneer bhurji
Add the paneer pieces to the base mixture. Sautee so that the paneer is crumbled and well coated in the base mixture. Add very little water, then lower the heat, cover with a lid and let it cook for another 10 minutes. Paneer should also be kept quite dry for easy stuffing later.
Parathas
While you can make any kind of stuffing for the parathas, we are going to cover – plain, kheema and paneer parathas here. 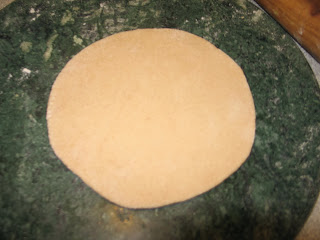 Ingredients:
2 cups wholewheat flour
Kheema (as prepared above)
Paneer (as prepared above)
Ghee
Grated cheese
Salt
Method
Take the flour in a large, flat, circular surface. Mix in a little oil and salt. Now start adding warm water to the flour, mixing it with your fingers at the same time. Keep adding water till you can make a soft dough which is not sticky. If it is then you have added too much water and now need to add a little more flour to get the consistency right. The finished dough must be nice and smooth.
This was the traditional method. But if you have a good food processor or a dough maker at home then I suggest you use that to save on time and effort. The result is just the same.
Now divide the dough into equal balls roughly the size of golf balls. Sprinkle with flour and on any flat, clean, non-sticky surface get ready to roll! Using a rolling pin roll out the dough into flat surface ideally in the shape of a circle. Use a brush and spread a little ghee on this surface. Mark a centre point and then fold in the flat dough from the edge to the centre. Result should be almost like a square. Now sprinkle some dry flour and start rolling it out again, turn and do the same till the square gets a bit more flatter and bigger.

Heat a heavy-based pan and when hot put in the paratha. Turn over when it starts blistering. Add a little more ghee to both sides if required. Your plain paratha is ready!

You can make cheese, kheema,and paneer parathasin a similar manner. Just a spoon or two of any of these to the centre of the rolled out dough, fold in and then taking care that the stuffing does not ooze out, start rolling the pin. Continue rolling evenly on both sides till the result is a flat square shaped dough. If needed sprinkle more flour to prevent the dough from cracking. Heat on the skillet on both sides by adding a little ghee.
Lo behold your parathas are ready. Eat with spicy mango achaar (pickle) and plain yoghurt!
Glossary
Kheema – mince meat (can be beef, chicken, mutton)
Paneer – Indian cottage cheese
Paratha – Indian stuffed flat bread
Garam Masala – ground mixed spices