5 pm -WTLH SHOW!! The entry was clearly visible among the other roughly scribbled entries on my planner under the date Friday, October 16. The bright red colour, the text in all CAPS and two exclamation signs at the end meant that someone was super excited about the show!

‘Hurry up!’ was the mantra on my lips as soon as they got home from school, fed them a snack, got them changed at breakneck speed too. “It’s almost 4 o’clock we need to rush!” I said as I ushered them out of the house. We took the MTR, got off at Wanchai station and started walking briskly towards the venue, my eyes glued on Google maps more than my kids. HKAPA, where the show was being played, was a good 10-12 minutes brisk walk from the station. Once there we were quickly ushered in to the announcement, ‘The show is about to start please take your seats,’ phew! we made it! I gave myself a silent high-five just as the sound of a melodious flute began to fill the air, and with that the auditorium fell silent. 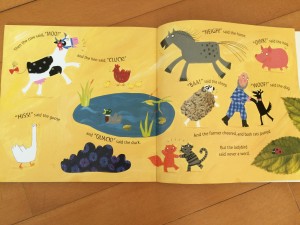 Brilliantly played by the four characters on stage who along with their supporting cast of farm animals seem to fill up the stage with their presence and yet be obscure when needed, what really caught my eye was the simplicity of the set. The animals were made out of ‘everyday farm’ tools – a horse from a bicycle, a goose from a wheelbarrow, a pig from a barrel, they seemed to add a touch of reality and warmth to the farmyard, making us want to pet them and making the audience gasp when ‘the hog ate up all the other animals food’! The artists made the audience clap and sing along to the beats of simple repetitive lyrics and instruments played on stage. With such a young target audience interaction and participation works best, which was done effectively by the four characters as they cajoled the audience to make animal sounds going Moo and Baa, pat-pat sounds for the ladybird to show up, tap their feet, stand up and say Hurrah that even the adults couldn’t resist joining in. Bringing up Lanky Len from the audience was another brilliant idea as the audience coaxed and cajoled Mr. Lanky to go up on stage and play the part! Turned out he became the crowd favourite by the end of the play as I happened to ask my kids and a few others.

Timed well at 55 minutes, WTLH is perfect for the 3 years and above age group as recommended, though I did observe a bouncy 18 month old go up and down her seat bobbing to the music, eyes firmly glued to the stage. While both my sons aged 7 and 11 were fairly above the recommended age, they thoroughly enjoyed and participated in the interactive sessions during the show. Though after some time I did notice my 11 year old looking at the watch more than once, my younger son couldn’t stop talking about the show and then excitedly asked me as we were walking out “When are we going to watch Hairy Maclary?” That’s the new ABA Productions show coming up in late October. 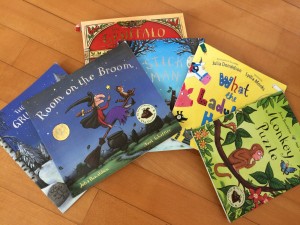 WTLH show is a direct adaptation from Julia Donaldson’s award winning book What the Ladybird Heard. Ever since I read her book The Gruffalo for the first time, about 5 years ago, I have become a big fan of her books, adding one to our collection every year, well at least until the boys were in the board book reading stages. Monkey Puzzle, Stick Man, The Gruffalo’s Child, Room on the Broom to name a few make memories come flooding in even when I read them today. I had gifted What the Ladybird Heard book to my younger son on his 3rd birthday and night after night, we would both sit up and read page after page of this wonderful book with its colourful illustrations by Lydia Monks, trying to find the glittering unassuming ladybug in its pages, who didn’t speak much but who turns out to be a Hero at the end as she is the one who saves the prized cow from getting stolen. 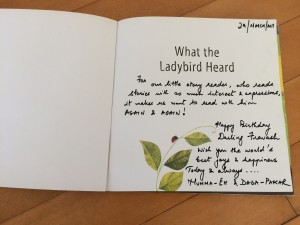 All this and more came rushing to my mind when I was asked to do the Giveaway and Review for this play by ABA Productions who very kindly offered me tickets to watch the show, which I grabbed with as much enthusiasm as seen in the children bobbing up and down during the show!

So if you haven’t guessed yet, let me tell you that the someone mentioned right at the start of this post is ME!

What the Ladybird Heard – The show runs from October 16 – 18 at HKAPA, Hong Kong.

Disclaimer: Please note that while I was invited to attend this show as a blogger and freelance reviewer, the views given above are solely based on my personal experience.