“It’s a guinea pig,” was the answer to the frown on my face as I stood next to a cage closely observing the resident specimen. “Ah a guinea pig,” I automatically responded as if I knew inside out of this species. Honestly although I knew of guinea pigs I didn’t know what exactly they were – hamsters, chinchillas, mice, just the same – all rodents. “He is the school pet,” I was told, the same school that I work in part-time, “and available for the children to take home over the weekends.”  Oh nice, I thought, that could be the answer to all my pet problems. My sons have been asking, pleading, demanding for a pet since a long time and I’ve always maintained a firm NO, because with no help and with our constant travelling it was just not possible to have one. But imagine if one could bring home a pet for a weekend, for holidays, and then hand him back over right back when school starts or when we travel – how convenient! But hold on, a guinea pig? My comfort level with house pets was limited to dogs and cats or possibly cute looking rabbits. This mouse-looking creature with its beady eyes, long claws and sharp teeth was not something I was eager to take home. Well that’s besides the point, I told myself, he was only available to children not to teachers so I didn’t have to feel guilty about not taking him. “You could take him home too if you like,” my thoughts were interrupted by the teacher’s voice. “Oh…..hmmm……yes……my boys would certainly love to have him/her…..it” but would I?

After making silent promises to myself to take Guinea (that’s his name by the way) home one weekend after the other, a couple of weeks just passed by. Meanwhile I was trying my best to get friendly with him, petting his head, lifting him up from the cage and running my fingers through his long, smooth fur, but taking care that he doesn’t get too close to my fingers. “What does he eat?” I asked. “Oh he’s a vegetarian, loves his broccoli and carrots.” “Oh I see,” I said. For the time being my fingers were safe.

It was almost after two months that I had the courage of finally taking him home. It was more to watch my children’s faces shine with excitement than anything else. So one Friday when I met the boys after their school bus drop, I said “I have a surprise for you boys! Can you guess what?”  I got all kinds of answers from “A cake! A toy! Daddy’s home!” They had no idea, absolutely no clue about the furry little pet who was waiting at home for them. When we walked in through the door, they couldn’t believe their eyes and after three nights of Guinea living with us, I finally understood why people kept this rodent as a pet. We learnt that Guinea had his own ways, mannerisms, sounds to let us know when he was hungry, when he wanted to play and be petted and when he just wanted to be by himself. Of course looking up Google fast tracked that awareness tremendously! I was always worried that something might go wrong, we might lose him somewhere and never find him or that we might step on him or he would choke on something and I wouldn’t know what to do. But thankfully so far we have been accident-free. We did “lose” him once in the house and no amount of “Guinea, Guinea” shouts got him out. After a panicky fifteen minutes we found Guinea sitting quietly at the back of a toy basket! Phew! It was quite scary.

His visits became more and more frequent from weekends, to four days in a row, to having an opportunity of spending an entire holiday together during the Chinese New Year break. He was better than any play date. There were no arguments, no bickering and no extra dinner to be cooked! Instead of having to find activities to keep the boys busy, I had to actually make deals with the boys to get them out for dinner sometimes! They were just so happy being at home with Guinea. From crawling races with the kids to sailing on the Titanic, to facing a fierce dinosaur, Guinea did it all effortlessly. And his kindness was returned in good measure as my sons took utmost care of him. My younger son always gives him his meals before he could eat his own, would always make sure that his water bottle was refilled, helps me clean his litter and make his ‘bed’ and also gives Guinea a good brushing session, though I think Guinea isn’t too fond of this last bit of pampering.

But what I really found fascinating is how in the span of a few days, Guinea has managed to weave his way into our hearts. Sitting contentedly on my lap as I work on the computer or being my son’s reading companion as he reads his book or being a comfort blanket to any one of us who needs some quiet time away from human influences, Just holding him in our arms, feeling his silent purring would soothe our distraught nerves. It is such a delight to hear Guinea talk to us, demanding food, specially early in the morning, the minute she hears someone walk by her cage. Lying in bed I hear my 7-year old chopping carrots to feed her, while I silently pray for the safety of his fingers! My favourite time with Guinea is late in the night when the boys are fast asleep and the house is quiet and peaceful. I think Guinea senses this too as he jumps out from his cage willingly wanting to explore his surroundings, making soft squeaky noises as if he is telling to me about his day.
Whenever Guinea is with us, I love the fact that I have someone whom I can say a Bye to when I go out or a Hi Guinea when I am back. For his tiny size and almost absent voice, I don’t know how Guinea can manage to fill the house with his presence. So much so that after he goes away, we still tend to enter the house saying a “Hi Guinea” automatically and then noticing the empty space where his cage is normally kept. Yes we do miss him, quite a bit actually, but no before you can start giving me advice, I am still NOT getting any permanent pet into this house, For now our Guinea is the perfect pet! 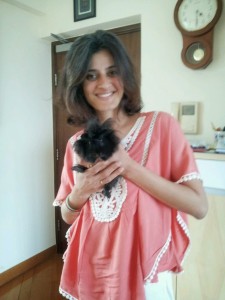 PS: Although I have written this post assuming Guinea is a boy, there are chances that he could be a she. At least both my boys are convinced that Guinea’s a girl, so next time he/she comes home I am sure to give him/her a closer look……with Google on the side of course!