December 11, 2001, 10:20
I was pacing around, getting more agitated by the minute. He was already 20 minutes late. 20 minutes too long when you are dressed in your formal wedding attire, sparkling from head to toe, trying to ward off those last minute doubts of whether this was the right thing to do, the right hand to hold. A small crowd of family members and friends building up around me, each pointing and showing where the bride was and then taking a quick glance at their watch to highlight the point that ‘he’ wasn’t here yet!
10:30
My cousin thought this was the best time to crack a joke. “He hasn’t run away, has he Mehroo?” ha ha ha! Then comes my mother, face writhed in pain, as she was bravely bearing the terrible back pain from the accidental fall that she had at home just a few days before my wedding day.  “Why don’t you call him, Mehroo?” As if I hadn’t, atleast a few hundred times by then, the phone ringing endlessly into oblivion. Where is he?
10:35
“They are here! They are here!” I heard someone shout, breaking the silence that we all had descended into in the quiet corridors of the fire temple. “Thank God!” I muttered as I heaved a sigh of relief watching a grand procession lead by the groom and his grand father, walking towards us. Good, at least grand pa was making sure he wasn’t running away! Apparently, as I later learned, my future family had ‘at the last minute’, decided to walk to the venue that morning instead of drive. The distance was not important out here as they live pretty close by, but just the fact that they took this impromptu decision on such an important day gave me the first jitters of what a ‘planned’ life it was going to be. Afterwards as we held hands which was the custom, separated by a ceremonious white cloth, I took a vow among the others that I would cure him of this nasty habit and get him to be more punctual and planned. (Oh did I mention that I was digging my nails into his hand and letting off some steam?)
12 years later
I am waiting outside his office building. Thought it would be nice to do lunch together, one of the perks of having both kids in full day school now. We set a time and place. I call him before leaving home. I call when I get into the bus. I call once again when I am almost there, only to find out that he is still in the office! No I don’t get anxious or agitated or angry. I have been through all those emotions and more over the past 12 years yielding nothing much. Since there is no point in waiting at the bus stop, I start walking towards his office. I reach there and wait – 5 minutes, 10 minutes, thank God for smart phones at least I can keep busy. 15 minutes later, he walks out. Calm, composed, not a hair out of place, absolutely no signs of being rushed. And as he looks into my direction smiling, the same smile that had captured my heart a decade and more ago, I just shake my head and smile back. 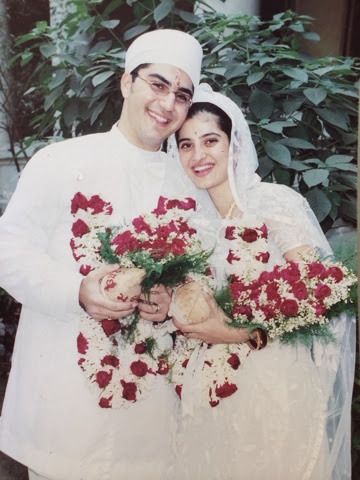 When I remember the vow that I had taken on my wedding day, I forget that my husband had taken a solemn oath himself that day ‘For good or for bad, for better or for worse, in sickness and in health, I will remain exactly who I am – the person my wife has fallen in love with and is getting married to…… until death do us part.’
Now can I really blame him?