If you have ever had the opportunity to travel in a mini-bus or a taxi in HK, you would know what my title is about! Thanks or no thanks to the excellent connectivity of public transport in HK we have not bought a car (atleast not yet) giving me endless opportunities of travelling by buses, mini buses and taxis. What I was not prepared for, and even after almost a year in HK still getting used to, is the speed at which the drivers drive and their not-very-polite manners!

Whether it is a highway, a main road or a narrow residential lane, the drivers drive at full speed regardless of the speed limit. They always seem to be in a massive hurry to get to the destination, at any time of the day. OK let me talk about mini buses first. The second you step into (not ‘sit down’) a mini bus they buzz off…..zoom! While you are struggling to get your kids and yourself in your seats, you also have to beep the octopus cards and take care that your handbag, shopping or school bags don’t land in someone’s face. What’s more the passengers sitting on the outer end of the seats are reluctant to shift in to make space, expecting you to be able to slide in and sit down, all while the bus is moving! Thankfully my boys are grown up now and manage to find their own seats quickly, but when I was pregnant or worse still carrying a stroller in one hand and a baby in the other, this attitude was infuriating!

From the time I enter the bus, I am constantly chanting hurry up, hurry up, get in quick, sit down quick, please hold on tight to my kids, while the bus is racing away. Again, since there are no designated bus stops for these mini buses, you have to shout out to the driver (who might be talking on his mobile or listening to his walkman) that you would like to get down. If you are lucky and he hears you, the bus screeches to a halt, lifting you off your seat, and the halt could be anywhere, near a signal, on the main road, or at a junction, the good thing is that the bus will halt! Then I almost have to run out from the bus along with my kids shouting out hurry up, hurry up, get down, in case the bus driver suddenly decides to take off. Any delay on our part will will result in impatient stares by the driver and the fellow passengers. Despite all my efforts, on two occasions, once in a big bus and once in a mini bus, I have got off the bus along-with one child while the doors have closed behind me leaving the other one behind! Both the times that I had protested to the driver I was given the so what big deal kind of a deadpan look.

I have had several other incidences but listing down the most bizarre ones only. Before we moved to Pokfulam, we lived in Happy Valley and we used to take a mini-bus from Happy Valley to my son’s school in Pokfulam and back everyday. The bus took a narrow, winding route through Shouson Hill at the same Formula 1 speed. While my kids would have great fun laughing out loud being thrown left and right out of their seats, I was always on tenterhooks pleading with them to stop ‘enjoying’ themselves and to hold on tight! 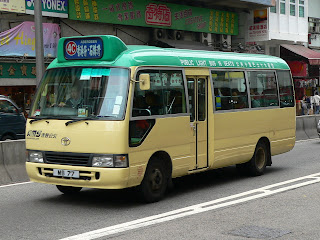 One other time the mini bus driver saw me waiting at the bus stop along with a child in the soaring heat, but did not stop in spite of seeing my flailing hand. I just watched him pass by exasperated and cursing under my breath. If the bus is full, maximum 16 seats, they won’t even look at you to let you know that the bus is full. They will merely keep driving while you strain your neck and keep guessing if they would wait. Again because they drive so fast, you have to be on 100% alert and squint your eyes to see the bus number from a distance so that you can stop him before its too late. Another time when I had to get off the bus and I shouted out “Yaw loh mmgoi” (”I want to get off please” in Cantonese), the bus driver just kept going, so I shouted again “Stop please!” but he still kept going for another few metres before he stopped! I was most upset and confronted him, to which I again got the dead pan look through his sun glasses.
One would think that the next best option would be to take a taxi. That’s exactly what I started doing specially to and fro school, but that was even worse. First of all it is next to impossible to find an available cab during the rush hour after school and then when you spot one there is a mad rush for it, so even though you were next in line to get it, the one who actually gets it is the person who first grabs it, which I absolutely refuse to do along with my kids! Then even if you do find one and explain to him where you want to go in Cantonese, there is no acknowledgement that he has understood and while he drives like a maniac I have to keep on high alert just in case. Once a taxi driver stopped  next to my house but in the middle of the road expecting me to jump out with the boys, while a bus was honking behind us! The trouble is they are too organised and take less than a few seconds to deal with things. e.g. When we arrive at our destination, they will stop the taxi, point out at the metre, take the money from you impatiently, push the change back in your hand and open the passenger door or sometimes even ask you to get off quickly before they begin the next circuit! I, as a tourist would feel highly offended but I realise that this is just the way they are. But again we have had our share of weird experiences in a taxi, specially when we were new to this area. I have had drivers taking me everywhere around the area but to my building and when finally we would land there would expect me to pay the full fare! One other time a driver shouted rudely at my son (something in Cantonese) for touching the passenger door, my son was just locking it! I shouted back at him (in English of course) asking him to stop the cab and let us down, he just continued driving.

Its amazing how such small irritants can make our day-to-day life so stressful. I know that HK is a fast-paced city and like the public transport, the super markets, the MTR (underground trains) all operate at jet speed leaving no room for slow movers. But in the middle of this mad rush, I am sure one can make some time to just pause for a second and SMILE! Having said that we have come across a couple of well mannered and cheerful taxi and mini bus drivers and although we may not speak the same language, their positive attitude goes a long way in keeping our spirits high. “That was a nice taxi driver!” even my younger son can feel the difference and while we wait for the entire bandwagon to follow this example, why visit Ocean Park for a roller coaster ride when a mind boggling, nerve tingling ride is waiting right at your doorstep?