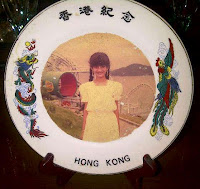 The first time I went to Ocean Park I must have been about 10 years old. I had visited HK as a tourist along with my mother and my sister. Though I have very faint memories about that trip, I do recollect my photograph being taken on an exceptionally windy day at The Summit (just near the old roller coaster) in Ocean Park and that it was given to me reproduced in a nice round souvenir plate. That plate still rests in our showcase, in our living room in Mumbai along with another similar plate with a photo of the three of us together – a fond memory of a city that would someday be my home. 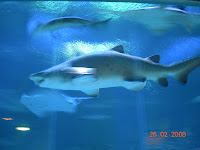 Years later when we first moved to HK in 2007, I took my 3 year old son to Ocean Park (OP) – his very first time. As we entered the park, one look at my starry-eyed, open-mouthed dumb struck boy and I knew that there was no looking back. We had so much fun despite the sweltering heat and microscopic mosquitoes, which is standard fare everywhere you go in HK. The aquarium, the children’s playground, the acrobatic show and his most favourite ride- the Raging River left me with no doubt that I would be coming to this place quite often and buying an Annual pass would be a wise decision! The best thing about Ocean Park is that it caters to all age groups and it is not just about fun rides and attractions, it is quite educational too with the focus they give on marine animals and conservation. It was also quite close to home and easily accessible by public transport which was another big plus factor for me.  With not many recreational places in HK, OP soon became our favourite day-out venue with just the two of us enjoying each other’s company and of course the familiarity of OP! Atleast twice or thrice a month, I would pick up my son from his pre-school around mid-day, catch the no. 6 mini-bus going directly there and devour our sandwiches before we started exploring the park. During our first visit we tried to do a little of everything, but after that we were quite focussed on what my son preferred. We would start off with the aquarium, with him waiting to catch a glimpse of the shark, the sting ray or the whale while I just relaxed in the cool interiors reading out stuff when necessary for him;  he would then make me run all the way to the playground where he would spend hours together playing in different parts of the playground or sitting on the kiddie rides. Sometimes if our timings co-incided we would watch the sea lion and the dolphin shows. Then we would take the cable-car which took a good 10 minutes to go upto the Summit. This was my favourite ride in OP because along with the nice sitting-down break and the cool breeze blowing, I would get the best views of the city, the bluish-green sea merging into the mountainous terrain. But it seemed to be the favourite ride for a lot of other people too, either that or because it was the only mode of transport to reach the other side, the cable car had a perpetual long queue. We realised over a period of time that the queue would get longer post lunch when the big groups from China came long and hence we timed ourselves well before that. The Summit side had a smaller jelly fish aquarium that we used to visit and then a long walk/escalator down to the Raging river ride. I think this is one of the oldest rides of OP as I remember doing a similar version of this ride myself when I was 10 and loving it as much as my son! 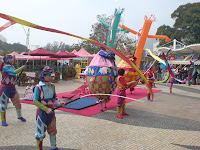 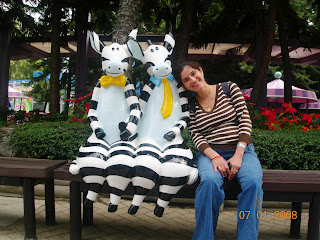 Soon I was pregnant with my second child and walking up and down the length of the park under the hot sun wasn’t quite appealing. But we still continued going there month after month. Once when I was about seven months pregnant and no longer eligible to sit in the Raging river ride I had to request another family to take my son, who was as crazy as ever about this ride, in their boat! I thought he’d be upset that I couldn’t sit with him but when the ride got over he wanted to go back with them once more!

I thought I’d get a long break from the park once my younger child was born. However the break did not last very long as I first brought my little one to the park when he was only 3 months old! The park visits continued after that though in a little different fashion – with me carrying a whole load of diapers, feeding bottles, toys and snacks, and it wasn’t quite easy to keep up with the different demands of the boys. All of a sudden I was looking for pram-friendly access and rides everywhere I went. My lovely cable car ride became quite a pain as I had to struggle to push the pram up the slope, then I had to wake up a sleeping baby (if he was), then fold the pram and push it inside the cable car cabin while holding my baby and then struggle to find place for the diaper bag, the snack bag, both the boys and myself and all this had to be done with the cable car gently moving!!

Post our UK stint of 2 years, when we returned to HK in 2011, amidst all the unpacking and settling down, my elder son kept pleading to visit OP once again! I was quite eager to see it too so within a month of us coming we visited OP, this time with two big boys who ran helter-skelter the elder one eager to show off all his favourites to the younger one, sitting in all the rides together in the children’s playground before running off to the do the cable car ride. OP had a new look now – new aquarium, a musical water fountain in the centre, a much fresher looking kids playground and it also had international food on the menu with hot dogs stall and Indian curry in one of their restaurants! They had also introduced The Ocean Express- an alternate for the cable car which is an underground train that takes you from the The Waterfront to the Summit in less than 4 minutes! The first time was a novelty but the cable car has a unique experience which can’t be replaced. However when we went to take the cable car, there was a very long queue in the middle of which there was a loud Chinese group and suddenly some members of that group just pushed their way and ran ahead of the queue leaving the rest of us gaping! My very polished little ‘Englishmen’ were quite shocked at such behaviour and kept asking me “How can they just do that Mummy?” I was quite appalled too and had no answer for them murmuring that its just the way it is. Another new discovery for my elder son was that he wasn’t so small anymore and that he was eligible to sit on most of the park rides now but since I had my younger one in tow and couldn’t do those rides, he was determined to bring his father along next time. Raging river was a raging success with both of them once again and at the end of the day our day-tickets were once again converted to Annual passes this time only for the younger one and myself to start our mission OP all over again. 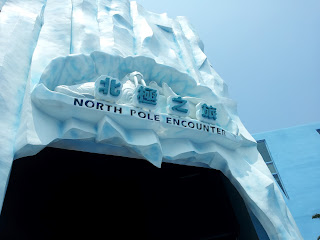 We still continue to go to OP, my last visit being last week! I continue the tradition of picking up my younger son from his pre-school and heading straight for the park. His favourite rides are in the children’s playground -Toto the Loco – a pink engine that goes round and round with lilting music and the Frog Hopper. Then its the cable car ride followed by the Raging river. This time though we came across a completely new section of the park – The Polar Adventure which had a roller coaster – The Arctic Blast where 4-year olds are eligible to sit. My son was so delighted to find out that he was eligible to sit in that roller coaster that he made me wait for 45 minutes in the queue under the hot sun, but in the end his screams and giggles in the ride were worth the wait. Thankfully we got to cool off after that as we headed to the new Penguin and Walrus enclosures in the South and North Pole Encounter areas respectively and where the temperatures are kept below 10 deg celcius! We would have liked to try out other rides too but our visits are normally short as we always have to pick up my elder son from school. As we walked out of OP, hand in hand, saying a Good bye to each one of his favourite rides, I realised that this could be our last trip to OP on our existing annual passes and it’s almost time to get new ones!

The bad news is time flies
The good news is that you are the pilot
Quoted by Michael Althsuler
O for Ocean Park. Thank you to ABC Wednesday, Mrs. Nesbitt, Roger and team.