“Nooooo… I want to watch MY movie!” yelled my little one as I switched on the TV to watch one of my most favourite old time movies, and he stood in front of me with his arms spread out as wide as possible to cover the TV. “I won’t let you watch,” he pouted.

Karz- the blockbuster film directed by Subhash Ghai was released in 1980, so I assume I was only five years old when I first saw this movie! For more details on the movie, please visit  http://en.wikipedia.org/wiki/Karz_(film). It is also available on youtube.

The film started with the courtroom drama which clearly held no interest for my son, but when the scene comes up when Sirjuda (Prem nath) – the finger-tapping dumb villain takes out his gun….“Look at his big gun.. quick”, I said, …and shoots the poor lawyer, my son was all alert. A steady barrage of questions follow “This man is bad?” “This man who is sitting down is bad?” “Why did he shoot him?” “Look that man fell down now!” “I like this movie.” Out comes my elder son now, “Its too scary, I don’t want to watch,” he said. “But I want to…,” intercepts my younger one!

We have finished about half an hour of the movie, the song ‘Dard-e-dil’ is going on now. One son is lying down and the other is sitting right next to me, reading my post as I write it, both watching the movie quietly. I have finally stretched my legs on the footstool, relaxing and unwinding after having one of the most hectic weeks of this term.

Karz has been one of my most favourite Hindi movies of all times and Rishi Kapoor my favourite hero for a very very long time. (He happened to be one of the judges at the Miss India contest when I had taken part, he was the one to ask me my on-stage question and he approached me in the flight on the way back …..but anyway that’s a different story for another time!) As kids, my sister and I were big Hindi movie buffs, and thanks to my mother, had a good collection of video tapes at home. Karz was one of them and it used to get played over and over again during lunch-time breaks, weekends, late nights or just whenever we got a chance.

‘Om shanti om’ song is playing now and my elder son suddenly loses interest in my blog and starts shouting excitedly “I have heard this song, Om Shanti Om has the same song too!” He was referring to the Shahrukh Khan movie featuring the same title song, so now there is a further interest developed in watching this movie. Good! But it also means that I have to keep translating the movie for him, as I am trying to watch it myself and trying to write this blog….talk about unwinding!

Oh..one of my favourite tracks is playing http://www.rameshmusic.com/song.asp?songid=old43 where ‘Ravi Verma’ (Rishi Kapoor) and ‘Tina’ Tina Munim are riding their bicycles and passing through the small town where Ravi is getting memory flashes about his earlier life as he is passing through the tea estates and other familiar places, till he gets a massive headache and falls down. 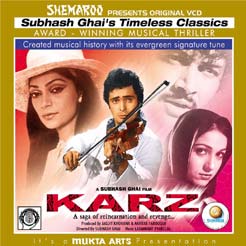 After years of practise, I can lip sync with most dialogues in the movie, but my favourite ones are:

‘Ravi aa gaya…..tu aa gaya beta!’ with the bells ringing in the background, the ex-Rani ma now dressed in a plain black saree utters these words, her first words in 20 years!

Pran in his versatile style captures attention with his qaafiyaas (form of Urdu poetry) and my favourite one of Kabira is towards the end when he is fighting with Sirjuda and removes Sirjuda’s shoes and says ‘Arre Sirjuda tera baaja toota….Kanpur ke joote de rahe hain sazaa, pehenne se zyada khane mein aayega mazaa!’

In fact when I was writing this dialogue, I googled Pran and was amazed to find out how well-respected the veteran actor is in the industry and that his working career had spanned – 60 years! The legendary “Villain of the Millennium” has had a marathon six-decade career in Hindi cinema and is one of the most celebrated actors of the industry. So effective was his acting that it was said that people stopped naming their children ‘Pran’ because of his negative roles, while the industry had started calling him ‘Pran Sahab’. In 1970-81, Pran was paid much more than Amitabh Bachchan for the film ‘Don’! – source Wikipedia. More information on http://www.pransikand.com

Hindi movies are quite lengthy and some can go on forever…but with their colourful songs, fight sequences and emotional drama they are complete ‘paisa vasool’ and classics like this one can be played and re-played for generations. Who knows, maybe one day one of my sons would be making their children watch Karz and saying “Do you know when I first saw this movie with my mother, I was quite scared?”


PS: The title of this post was given by my elder son.